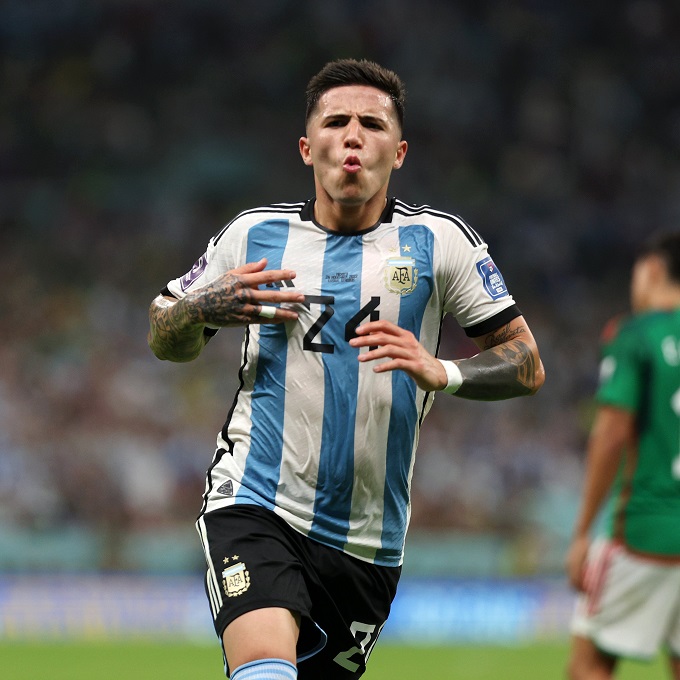 Argentina have bounced back with a major 2-0 win over Mexico at the Lusail Stadium.

And it was their star captain Lionel Messi who led the Albiceleste to this incredibly important victory that puts them back in the picture for the World Cup’s Last 16.

Messi opened the scoring with a stunning shot on 64 minutes from the edge of the box that ended up in Guillermo Ochoa’s bottom left corner.

Enzo Fernandez sealed the win with a screamer of his own after 87 minutes as his curling shot from the left hit Ochoa’s top left corner.

Fernandez received the ball from off a short corner and bends it beautifully into the top right corner of the net past Ochoa. A beautiful finish from the 21-year-old that looked to have wrapped this one up for Argentina.

Argentina dominated 58 per cent of possession throughout the encounter.

The Albiceleste registered a total of five shots, two of which were on target.

Mexico, on the other hand, produced four shots but only one of them was on target.

Argentina have therefore climbed off the bottom of the table and are second in Group C.

The Copa America winners are just one point behind Poland, who drew with Mexico and beat Saudi Arabia earlier today.

The Mexicans are now last with only one point, while Saudi Arabia are third with three.

Ben Chilwell has sent a positive update on his rehabilitation from injury to followers of Chelsea as he continues his work to return to fitness during the break for the World Cup.

The full-back pulled up injured in added time against Dinamo Zagreb and eventually needed help off the pitch by Chelsea’s physios before leaving Stamford Bridge on crutches. Television cameras appeared to catch Chilwell telling teammate Mason Mount that his hamstring had ‘popped’

Indeed, Chilwell was not involved in Chelsea’s squads against Arsenal, Manchester City or Newcastle, with 18-year-old Lewis Hall slotting in at wing-back for the latter two fixtures. The 25-year-old started a rehabilitation programme with Chelsea’s medical department in early November after a scan revealed a ‘significant injury” for the defender.

However, supporters will be hoping that Chilwell is in contention for the return of the Premier League when the Blues face Bournemouth following Chilwell’s latest Instagram Story. The former Leicester star published a video of himself running on the treadmill accompanied by the comment: “Working”.

Having suffered an anterior cruciate ligament injury last season, Chilwell only made it back onto the Stamford Bridge pitch in the Blues’ final game of the season against Watford after picking up the issue against Juventus in November 2021.

The careful management of his reintroduction to the first team had continued to be managed carefully with just eight starts to his name in 14 appearances this term.

Neymar was in tears on Brazil’s bench after he was forced off with an ankle injury during the 2-0 win over Serbia in their World Cup opener on Thursday evening.

Two goals from Richarlison got Brazil’s World Cup campaign in Qatar off to a flying start, but one of the tournament favourites now face an anxious wait after their talisman was forced off in the closing stages of the second half.

Neymar was fouled nine times during the game against Serbia – more than any other player on the pitch – and he even played on for 12 minutes after he suffered the challenge which caused the damage to his ankle.

After being substituted with 10 minutes remaining, Neymar was treated by two physios on the bench but the 30-year-old’s pain was evident as he covered his face with his jersey while he was being consoled by his Brazil teammates.

After the match, photographers near Brazil’s bench captured the immediate swelling to Neymar’s right ankle.

Neymar was also seen visibly limping as he made his way back to Brazil’s dressing room.

Carlos Queiroz has accused an Iranian media outlet of helping the England team by revealing his starting line-up.

That was just hours before the opener against Three Lions kicked off and Iran went on to lose 6-2 at the Khalifa Stadium in Doha.

Queiroz was not best pleased and sarcastically congratulated a reporter at the end of his press huddle following the team’s training session.

He said: “I cannot finish my statement without congratulating Varzesh 3.

“Congratulations. Because you did a good job putting our starting line-up in the press for the morning for the English team, congratulations.

“You are really a great hero, congratulations, good job.”

Adrien Rabiot could finally complete a transfer to the Premier League despite his summer move to Manchester United collapsing, according to reports.

The Frenchman was close to sealing a move to Old Trafford over the summer but saw the £15million deal fall through.

However, following a strong performance against Australia at the World Cup, including a goal, Rabiot has returned to the radar of a number of top Premier League outfits.

Calciomercato report the midfielder is being monitored by London trio Arsenal, Chelsea and Tottenham.

Rabiot, 27, wants a contract worth £8.6m per net – a figure the three are all prepared to offer.

Sophie Ingle and Erin Cuthbert’s second half strikes were the difference as Chelsea maintained a 100% start in their Women’s Champions League group by beating Real Madrid at Kingsmeadow.

Real Madrid were able to silence the Chelsea threat in the first half but in the second 45 Ingle’s shot from a corner and Cuthbert’s worldie broke the Spanish team down.

Following a drab first half the Blues took the lead through Ingle’s 66th-minute header after Millie Bright flicked on a corner.

Chelsea, who returned to the top of the Women’s Super League on Sunday after beating Tottenham at Stamford Bridge, came into the match leading Group A, two points ahead of unbeaten Real Madrid.

After a 1-0 win over Paris St-Germain and an 8-0 victory against Vllaznia in their two other Champions League matches, a bouncing Kingsmeadow crowd was expectant.

They came close through Fran Kirby’s early curling effort in an otherwise uneventful first half.

With 25 minutes to go there was a nervous energy at Kingsmeadow with Real Madrid growing into the game, but that was soon replaced with relief after Ingle’s opener.

And Chelsea nearly added a third through two Niamh Charles efforts at the death as they cantered to victory.

This was the first meeting between Chelsea and Real Madrid, but Las Blancas boast a fine record against English teams in the Champions League having knocked out Manchester City for the second consecutive season in August.

Havertz started the match at the Khalifa International Stadium in Qatar, and looked to have put his side 2-0 just before the break after tapping home Serge Gnabry’s cross.

There was an instant suspicion of offside however, and after a surprisingly long VAR check, the goal was ruled out with the 23-year-old clearly offside.

Germany took the lead in the first-half through Ilkay Gundogan’s penalty and were expected to cruise to victory.

But two late goals from Ritsu Doan and Takuma Asano stunned the four-time World Cup winners as Japan defeated Germany for the first time in history.

Analysing the disallowed goal for ITV, Wright was incredibly frustrated with Havertz’s positioning, exclaiming: “Havertz, just stay where you are!

“The ball is coming across there. You don’t need to go. If he just waits, just stay there you’ll be able to slide in and get it.

“The thing is you could see how much close he was to the goal. I can’t believe this is happening at this level!”

“Sule drops so deep that he [Asano] is kept onside. Poor play. But the touch and the goal is quality.”

There are reports that Serie A giants Inter Milan and Juventus are both interested in signing United States superstar Christian Pulisic after the World Cup.

The 24-year-old is the USMNT’s biggest name in Qatar, but at club level, he has struggled for minutes at Chelsea and could be open to an exit sooner rather than later.

Spanish newspaper Fichajes, via the Daily Mail, reports that the American could well be heading for Italy in the coming weeks, with both Inter Milan and Juventus vying for his signature.

Pulisic has previously played in America, Germany and England, but a move to Italy would represent a fresh start for a player lacking in game-time.

At Chelsea in the Premier League this season, he has started just three matches, having to put up with appearances off the bench in a further 10 games.

He joined the Blues in 2019 from Borussia Dortmund, and currently earns over $9million a year – far and away the highest salary for a US soccer player.

‘Captain America’ will be pivotal to the USA’s hopes at the World Cup in Qatar this month, and he played the full 90 minutes in the opening draw with Wales.

Japan have pulled off the second stunning upset of the Qatar World Cup by beating four-times winners Germany in a dramatic comeback.

In echoes of Argentina’s humiliating defeat to Saudi Arabia yesterday, Germany took the lead through a first-half penalty but a spirited fightback saw the underdogs claim a famous 2-1 victory.

The result sparked wild scenes of jubilation from Japan’s loyal travelling fans while Germany’s expectant fans could only watch on as horror.

The Germans had dominated the contest at the Khalifa International Stadium and taken the lead with a 33rd minute penalty from Manchester City’s Ilkay Guendogan after Japan goalkeeper Shuichi Gonda had fouled wing back David Raum.

But a quick-fire double from Ritsu Doan and Takuma Asano within eight minutes turned the tide and set the Samurai Blue on course for a historic win.

The defeat was the third in a row in the opening match of a major championship for Germany after a loss to Mexico at the 2018 World Cup, when they bowed out in the first round as champions, and to France at Euro 2020.

Cristiano Ronaldo has been handed a two-game ban and fined £60,000 by the Football Association for knocking a fan’s phone to the ground.

The 37-year-old, who is now a free agent after having his Manchester United contract was terminated, was charged with “improper and/or violent” following the incident at Everton in April.

The FA are due to officially announce Ronaldo’s punishment later this afternoon.

And they will provide the full written reasons behind their decision for the sanction also.

Both Chelsea and Newcastle have been linked with a swoop for the Portuguese legend.

However, this now means that he will be suspended for two games if he joins another Premier League club.

Ronaldo is expected to play when Portugal face Ghana tomorrow.